Thrilling, fun, nerve-racking, welcoming, stressful, noisy, homelike. Those are among the many adjectives that describe my one-week class-free college experience at the University of Michigan. While Welcome Week does not completely encapsulate what a typical college week looks like, it does give every freshman an idea for what to expect in college. Even though some of the takeaways I will list briefly may seem somewhat obvious, I hope that keeping those lessons in mind throughout the school year will help other freshmen not only survive, but thrive and succeed in this exciting yet unknown phase of our lives.

There is absolutely no reason why anyone should be walking from South Quad to the Modern Languages Building in a 90ºF weather or be late for a game at the Big House when we have an incredibly useful bus system. Having barely used public transportation before coming to Michigan, I thought I would have so much trouble using the bus system at Michigan. However, every route has a straightforward name, so you should have no excuse for not being able to visit your friends at Mojo or Markley. Mastering the bus system is optional for everyone except for those living in North, and people in the Engineering or the Art School. Sidenote: Commuter South and Commuter North do not run on the weekends.

6685 enrolled freshman. That number surpasses the population of towns some students at Michigan are from, so how are we supposed to feel special and unique in this huge ocean of people? Well, Ann Arbor is not your ordinary city. The University of Michigan and its student body dominates this city, basically transforming it into a city of teenagers who are looking to shape their future and make connections, thus the friendly and welcoming atmosphere that transpires in the city. Coming here for MLead, I thought people were pretty much forced to get to know others because at the end of the day, we were a team that needed chemistry. However, people took the time and interest to get to know every person they interacted with. I suddenly became really close with the people in my dorm and nearby dorms and every anxiety I had over the summer of making close friends became absurd. After everyone finished moving in, I again thought it would be hard meeting new people, but once again, I was proven wrong. Students here, no matter their age or year, want to get to know as many people as possible. Every stereotype you have from high school is broken here. Athletes and fratboys are not arrogant or cocky as portrayed in films or series. Instead, those are possibly one of the nicest people on campus and are willing to help you navigate through the school. I do not think transitioning and enduring the first week of school would have been as smooth if it had not been for the people in my dorm, the people I met at MLead and random parties who still say hi to me and the many people I now call friends.

3. Be safe at parties

Pretty self-explanatory. Having fun and making good choices are not mutually exclusive. Take care of yourself as you cannot create good memories if you cannot remember them *wink wink*.

4. You are here for a reason

For most of us, Michigan is and will possibly be one of the few places where we meet so many brilliant minds. It is easy to feel undermined by Ross students who are in Calc 10 as freshman or basketball stars who will hopefully take us to our second Final Four in a row (@CharlesMatthews and @JordanPoole). However, each one of us, as the title mentions, is here for a reason. Every one of us was hand-picked by admission officers because they saw something in us that makes us special, so please stop questioning if you are good enough for Michigan and start enjoying your short stay here. Stop comparing yourself to other people and start being a leader and the best.

5. The Big House is probably the most known building on campus

Whenever someone asks me which dorm I am staying in, I know that responding with Fletcher Hall will not be enough as it is probably the most unknown dorm on campus. I explain that Fletcher is right across the IM Building. Once again, only about 2 out of 5 people are able to picture Fletcher’s location. It is only until I finally say my dorm is near the Football Stadium when everyone can picture its location. Michigan being a football powerhouse is an understatement as it has a long tradition of success, defeats, but most importantly loyal fans. When I showed up to the Watch Party I was amazed by two things: how almost every freshman was able to make it to the Big Stadium yet cannot make it to Fletcher somehow and the unconditional support of Michigan fans. Celebrating Karan Higdon’s rushing TD against Notre Dame this past weekend with a friend from Ohio and another friend with zero football knowledge showed me that sports at Michigan are more than just games, they are what connects the millions of Wolverines around the world.

6. Michigan is my home

If after welcome week you are asking yourself whether or not Michigan is your home, it is most likely not. Even if the next statement is cliché, from the very first moment I stepped on campus to move in, I fell in love with Ann Arbor. There is something indescribable about this campus that makes you feel at home. It is the combination of people, diversity, excitement, family, and so much more that has not allowed me to regret even for a second my decision to come to the University of Michigan. I now understand why adults always say college has been the time of the lives, as I have enjoyed every single second of my stay here. I have already made so many memories that I cannot even begin to imagine what college has in line not only for me, but for every freshman. With only one week here, I cannot imagine leaving this place that I will be calling home for the next four years and the people who I will be calling family in the near future. 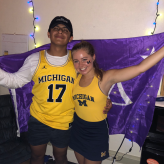 How to not Gain Weight at the College of Charleston

Instagram
Hii! My name is Grace and i’m from Longview,TX. I am not 100% sure yet but Ole Miss is one of my top choices for the fall!! I plan on majoring in marketing and am definitely rushing! I’m currently looking for a roommate and am so excited to meet new friends!
Hii!! My name is Allegra Crawford and I’m from Highland Park, IL. I am most likely going to Auburn in the fall and plan on majoring in biomedical sciences to become an orthodontist. I also plan to rush in the fall. I love being with friends, shopping, lacrosse, and going out, but enjoy a night in, too! I would love to meet new people and I am looking for a roommate to most likely live in the quad or the village so please feel free to reach out💖
What’s up my name is nick keener from Lancaster pa! I will be attending west chester university. Some of my hobbies are watching football, playing basketball and just having a good time with friends!
hi everyone! im madi and im from northern illinois. i will be attending the university of alabama double majoring in management information systems and marketing in the fall! i plan on rushing and am so excited for game days and college life! i love going out w my friends, shopping, traveling, and naps (lol). im so excited to meet you all and i cant wait for the next four!!!!! #rolltide 💋#humansofuniversity
hey y'all!!! my name is brooke hughes and i am from newnan, georgia! I grew up at UGA fan (shocking i know) but the tide pulled me in! I love football, true crime documentaries, and reading.
heyyy, my name hannah and i’m from haysville, ks. i go to campus highschool and i’m 100% commuted to KU. I’m going on the Pre-Pa path and although i’m not completely sure what i want as my major i’m leaning towards human biology. i’m also thinking about minoring in dance. for my hobbies i love thrifting, dancing, hanging out with friends and just trying out new things. i’m currently look for a roommate and am open to any of the dorms. my instagram is h.annah.ruth and my snapchat is hannah46100!!
Hey y’all! My name’s Ocean and I’m a fourth year student at Stony Brook University. I’m a Pre-Med, double major in Biology & Political Science, and a triple minor. I’m very involved with activism & student government, and have a strong interest in environmentalism & public health. When I’m not cramming for my midterm, you can find me cooking, knitting, trying out archery, video editing, or spending quality time with my friends. Feel free to hmu! ◡̈ #humansofuniversity
Hi my name is Jillian Olson and I am going to San Diego State University majoring in Psychology and minoring in pre law. I love hanging out with my friends, shopping, traveling, trying new things and doing anything spontaneous. I always take candid photos of my friends and candid videos so if you like that. Text me if you wanna be friends because I will be in need of them :)
Heyyy i’m Daniela! I just moved to Naples Florida from Jersey. I am fully committed to elon and am so excited! I’m planning on majoring in psychology. I love going out, beach days, going to the gym and shopping! Feel free to reach out I love making new friends!!!