The Trials of Dreams and Reality

The most vivid memory from my early teen days: me wandering around what then seemed like the vast halls of my high school and telling my best friend, “I wish the world would end before I have to apply to university.” However, other than intensified global warming and the ascension of Trump, Earth moved along just fine; and I, harrowed by the wildest dreams, applied to uni months earlier than my peers to meet the deadline for Oxford.

I received their rejection mail the day before my birthday. Then, on the evening that I turned eighteen, I received an offer letter from the University of Toronto’s Trinity College.

I submitted my acceptance with regret, relief, and curiosity. Regret because I’ve dreamed of Oxford since toddler age, relief because attending University of Toronto is far from a shabby reality, and curiosity because I have yet to see the place to which I just committed four years of my life. That night, I dreamed of my first day at a surreal Trinity. Trees with blindingly rosy flowers welcomed me at the door and spiralling staircases transported me past fancy schmancy windows.

Back to reality a few months later, my band travelled from Ottawa to University of Toronto for MusicFest. When we were herded off the bus, the fatigued me failed to realize that we were on the campus, my campus, until my boyfriend informed me that Trinity is around the corner. I ordered him to “hold my hand at this thrilling moment” and clutched at him with clammy fingers as the steepled building came into view. 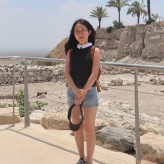 Trin Freshie at the University of Toronto, studying something in the humanities. An avid reader and a hopeless romantic who's looking to get more experiences in writing... and in life.

Kirsten Lam at University of Michigan

Instagram
Heya! I’m Zoe and a sophomore student at UCLA! I’m a psycho bio major planning on going to optometry grad school. I love yoga, going out, exploring nature and travelling! Hit me up @zozobun and let’s be friends!
Hi my name is Rowen. I am from Columbus, Ohio. I am 100% going to Tampa. I plan on majoring in marine biology. I like surfing and going to the beach. I also love working out. I’m looking to meet some new people to hang/ go out with before I get down there. Feel free to reach out!
Hii! My name is Asianna Junge and i’m an incoming freshman at Rice University! Some fun facts about me are that I was accepted through the QuestBridge National College Match, i’ve been in STUGO for 9 years, i’m currently working to provide free menstrual care in my schools bathrooms, I LOVEEE Studio Ghibli, I LOVEEE cats (even though i’m allergic), i’m planning to major in business, and i’m learning to play the guitar!
Hii! My name is Grace and i’m from Longview,TX. I am not 100% sure yet but Ole Miss is one of my top choices for the fall!! I plan on majoring in marketing and am definitely rushing! I’m currently looking for a roommate and am so excited to meet new friends!
Hii!! My name is Allegra Crawford and I’m from Highland Park, IL. I am most likely going to Auburn in the fall and plan on majoring in biomedical sciences to become an orthodontist. I also plan to rush in the fall. I love being with friends, shopping, lacrosse, and going out, but enjoy a night in, too! I would love to meet new people and I am looking for a roommate to most likely live in the quad or the village so please feel free to reach out💖
What’s up my name is nick keener from Lancaster pa! I will be attending west chester university. Some of my hobbies are watching football, playing basketball and just having a good time with friends!
hi everyone! im madi and im from northern illinois. i will be attending the university of alabama double majoring in management information systems and marketing in the fall! i plan on rushing and am so excited for game days and college life! i love going out w my friends, shopping, traveling, and naps (lol). im so excited to meet you all and i cant wait for the next four!!!!! #rolltide 💋#humansofuniversity
hey y'all!!! my name is brooke hughes and i am from newnan, georgia! I grew up at UGA fan (shocking i know) but the tide pulled me in! I love football, true crime documentaries, and reading.
heyyy, my name hannah and i’m from haysville, ks. i go to campus highschool and i’m 100% commuted to KU. I’m going on the Pre-Pa path and although i’m not completely sure what i want as my major i’m leaning towards human biology. i’m also thinking about minoring in dance. for my hobbies i love thrifting, dancing, hanging out with friends and just trying out new things. i’m currently look for a roommate and am open to any of the dorms. my instagram is h.annah.ruth and my snapchat is hannah46100!!